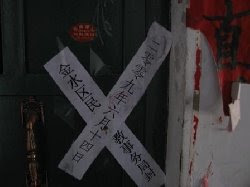 The incident began at 9:15 a.m. on June 14. Members of Rock Church were having their Sunday worship service, when several dozen unidentified officials and police officers suddenly broke into the gathering sites on the third floor, sixth floor and seventh floor. It was later learned that the officials were from the Zhengzhou Municipal Bureau of Religion and Zhengzhou Municipal Bureau of State Security.

Authorities occupied all the rooms, and detained the Christians. One young woman was in the restroom when a male police officer kicked open the door. Police officers on the seventh floor took videos and photos of all the Christians. Several officials dragged Pastor Dou Shaowen to the pulpit and attempted to force him to announce that the Sunday service was finished, and to disperse the church members. Pastor Dou refused, saying, „Sunday service must go on! Everything else should be discussed after the worship service.“ Two police officers forcibly dragged Pastor Dou from the pulpit and attempted to take him away. The church members denounced the officials‘ behavior and demanded that they produce warrants for the arrests and for sealing the church building. The authorities did not have warrants, but read a public notice from the Jinshui District Bureau for Ethnic Religious Affairs of Zhengzhou Municipality, stating:

After officials read the notice, they forcibly escorted Pastor Dou Shaowen, and another Christian, to Dashiqian Police Station of Jinshui District, Zhengzhou Municipality. In the meantime, officials escorted Feng Lu, the pastor’s wife, to her home where they searched the house and confiscated a computer and other personal property.

The Christians insisted on finishing the Sunday worship service, even though authorities cut off the electricity and continued to take videos and photos, demanding that the Christians leave. After the service, officials forced four Christians: Li Zhimin, Wei Jianhua, Zhang Julin, and Ma Jianbo to accompany them to Dashiqiao Police Station of Jinshui District of Zhengzhou Municipality for interrogation. Finally, the authorities posted sealing tape from the Bureau of Religion, sealing off all the worship sites of Rock Church.

Police released one Christian at 10 p.m. the same evening, while the relatives of the other six arrested Christians received phone calls at around 11 a.m. the next day, June 15, notifying them to come to Jinshui District Detention Center to pay a fine of 800 to 900 yuan. They were also told that their family members had been given a 15-day detention. After the families paid the fines, they were not given receipts or shown detention notifications. At 10:30 p.m. on June 15, police summoned another church member, Li Cuiying, and, as of the time of this press release, Li, along with the six other Christians, is still being detained.