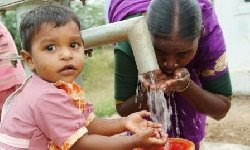 CARROLLTON, Texas, April 3 /Christian Newswire/ — A mob of anti-Christian extremists tried to murder a Gospel for Asia- supported missionary working at a Jesus Well drilling site on Tuesday. The pastor escaped unharmed, but they badly beat a ministry intern and one of the men drilling the well.

Photo: Children at a Jesus Well. Jesus Wells are a welcome addition to villages where Dalits („Untouchables“) are barred from using the village wells.

The incident occurred Tuesday when the well-drilling team arrived in the village where missionary Bala Nunwate serves. Bala, along with ministry intern Vincey Rao and the men who work for the well-drilling contractor, started working. About 20 minutes later, a mob of people who belong to a well-known, violent anti-Christian group showed up and tried to attack Bala. He managed to escape from their grasp, but the mob grabbed Vincey and the drilling crew chief.

The attackers badly beat Vincey and forced him to sign a statement saying he was an outsider who came to the village to convert people to Christianity. They threatened to take his life unless he signed the paper. After he signed it, they sent him away. It is illegal in many Indian states to convert people to Christianity by using force or allurement. These anti-conversion laws are ironically called „freedom of religion“ laws.

After he was released, Vincey found himself in a dilemma. He was unfamiliar with the village, so he hid out in a rice paddy overnight. At daylight Vincey found his way back to the church. The other GFA workers took him to the hospital to treat his wounds and then to the police station.

The extremists also badly beat the drilling crew chief. He was also able to escape and go to the local police, who took him to the hospital for treatment.

GFA officials had to go to the police station and file reports about the crime and the fact that the mob had taken the drilling equipment and the missionaries‘ bicycles. Later in the day, the officials were able to meet with the superintendent of police, and he helped them get most of their belongings back from the mob.

Work has yet to resume on the drilling of the Jesus Well in that village.

Gospel for Asia is an evangelical mission organization based in Carrollton involved in sharing the love of Jesus across South Asia.