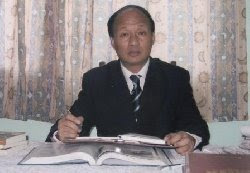 SHANGHAI, China, June 24 /Christian Newswire/ — On June 17 Christian human rights attorney, Zheng Enchong, was interrogated and tortured for nine hours by Public Security Bureau (PSB) officers because of his work defending Chinese citizens whose land has been confiscated by the government. During his detention, he was beaten, stripped and cigarettes were held to his lips and eyelids. Zheng Enchong has filed a written protest and plans to file a complaint to the central government.

According to ChinaAid sources, Zheng Enchong was summoned by four officers from Zhabei District Branch of Shanghai Municipal Public Security Bureau on June 17. During his detention, officers took turns slapping him five or six times in the face, and hitting him three times in the back of his head. Police also held lit cigarettes to his lips and eyelids. Later, the officers pulled him from the seat and took off all his clothing, except his underwear. Police threw his personal belongings, including: money, keys, pen, and a Bible and some cookies to the floor. Then the PSB officers proceeded to search his body.

Authorities compiled a written record of the interrogation without interrogating Zheng at all, and, then, wanted him to sign it. Instead, he wrote down a statement on the record describing his violent treatment by the PSB. He denounced authorities for using the same method on him as they use on Falun Gong practitioners.

Attorney Zheng has been summoned by officials nearly 20 times, and his house searched twice in the past two and a half months. In 2003, he filed a major legal case exposing how government officials conspired with Zhou Zhengyi, „the richest man in Shanghai, “ to illegally confiscate homes for demolition. Since that time, Zheng Enchong has been continually harassed and persecuted by Chinese officials. He was sentenced to three years in prison for „illegally providing secrets to overseas entities.“ The charge related to two faxes regarding workers‘ protests that Zheng was accused of sending to Human Rights in China, a non-profit organization. Zheng has also been beaten by authorities four times, so badly that he now has difficulty walking.

„As an internationally well-known Christian human rights lawyer, Attorney Zheng has always defended the poor and vulnerable,“ said Bob Fu, president of ChinaAid and a friend of Mr. Zheng and his family. „The repeated harassment and torture against such a conscientious rights defender demonstrates the Shanghai authorities‘ total disregard to citizens‘ basic human rights. We encourage the international community to continue to press the Chinese authorities to stop these hideous acts and to hold the abusers accountable.“

ChinaAid calls on the international community to contact the Chinese Ambassador and urge that the violence against Zheng Enchong end, and that the government respect and uphold human rights according to the Chinese Constitution and international agreements: