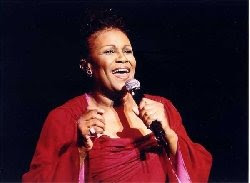 ‚The Queen‘ Comes to Gospel Music Channel in May World Premieres

ATLANTA, May 6 /Christian Newswire/ — Gospel Music Channel (GMC) Television Network will present world premieres of three unique, gloriously music-filled specials celebrating the remarkable, decades-spanning artistry of Queen Esther Marrow–heralded by fans around the world as the ‚First Lady of Gospel Music‘ Sunday nights in May. „Let The Good Times Roll“ will premiere on GMC on Mother’s Day, May 10 at 9:00 P.M. ET/PT. „Celebrate Good Times“ debuts Sunday, May 17th at 9:00 P.M. ET/PT and „Rock My Soul“ bows Sunday, May 31 at 9:00 P.M. ET/PT. All three special presentations will have encore presentations; visit www.gospelmusicchannel.com for complete schedule.

Ascending the heights to become true royalty in the realm of Black Gospel, Queen Esther’s incredible talent and vocal giftings had humble beginnings. Born in Newport News, Virginia, her mother named her Queen Esther at birth. But it was the grandmother who raised her who eventually led her young granddaughter through the doors of the United House of Prayer for All People. It was this early exposure to God’s music that forever sealed His imprint on the voice that would ultimately touch and inspire the entire world. In the course of her career, she has to date staged performances for three American presidents, the British Royal Family of England, and by special request of Pope John Paul II, who, before an open air audience of more than 300,000, openly tapped his foot in delight to the stirring gospel sounds of Queen Esther Marrow and her Harlem Gospel Singers.

Discovered by the great Duke Ellington, at the age of only 22, Queen Esther joined Ellington on his celebrated ‚Sacred Concert‘ world tour in 1966. Following her first professional engagements with Ellington, Queen went on in the 60’s to perform with the giants of the music industry–Lena Horne, Ella Fitzgerald, B.B. King, Ray Charles, Thelonious Monk, Chick Corea, Bob Dylan, and her lifetime idol, Mahalia Jackson, to mention only a few. A passionate supporter and voice in Dr. Martin Luther King’s ‚World Crusade,‘ Queen Esther shared her music and the stage with the recognized names of the day’s civil rights movement–names such as Jesse Jackson, Sidney Poitier, and Dr. Ralph Abernathy. She later performed at the Kennedy Center in New York to honor Dr. King’s widow, Coretta Scott King in 1968.

But it was perhaps Queen’s stirring desire to share gospel music with the entire world that has led to her greatest legacy. In 1992, she founded the Harlem Gospel Singers and began touring the continent of Europe with a sound that celebrated the highest callings of black America’s music–jazz, Blues and R&B influences, blended with the unmistakable soulful stirring of Queen Esther’s deep gospel roots. The majestic, flowing silk robes, the powerful choir, carefully selected solo voices, first-rate musicians on organ, piano, drums, bass and saxophone–the unmistakable artistry–all add to the richness of experiencing the Harlem Gospel Singers, who along with Queen Esther Marrow, are today celebrated on tour in the major music capitols of the world–from New York to Los Angeles, and from London and Paris to Milan and Berlin.

Gospel Music Channel is the nation’s first and only 24/7 television network devoted to Gospel/Christian music. GMC is the fastest-growing network in television today and can be seen in more than 45 million homes on various cable systems and nationwide on DIRECTV on Channel 338.