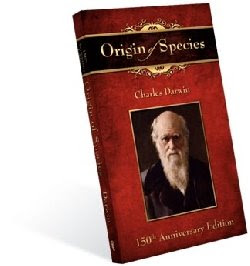 Special Origin of Species to be Given Away in Schools

MEDIA ADVISORY, June 23 /Christian Newswire/ — According to a recent survey, more than a third of professors at the top fifty universities describe themselves as atheist or agnostic. Among biology professors, it’s a whopping 61%. It’s no surprise then that belief in atheism has doubled in the college age bracket in the last 20 years. Best selling author, Ray Comfort, said, „Keeping intelligent design out of schools, is a hill to die on for evolutionists, so when I found that Charles Darwin’s Origin of Species was available in the public domain, I had an idea that would get the truth onto college campuses. We are therefore reproducing Origin of Species in an abridged form (280 pages) with an added ‚Special Introduction.'“

This introduction gives a timeline of Darwin’s life, and his thoughts on the existence of God. It lists the theories of many hoaxes, exposes the unscientific belief that nothing created everything, points to the incredible structure of DNA, and notes the absence of any undisputed transitional forms. To show the dangerous fruit of evolution, it also mentions Hitler’s undeniable connections to the theory, Darwin’s racism, and his distain for women. In addition, it counters the claim that creationists are „anti-science“ by citing numerous scientists who believed that God created the universe — scientists such as Einstein, Newton, Copernicus, Bacon, Faraday, Pasteur, and Kepler.

Comfort says, „This special edition includes many original graphics and (as it says on the back cover) is designed for use in schools, colleges, and prestigious learning institutions. Its release is timed to coincide with the 150th anniversary of Darwin’s book, initially published in November 1859 as On the Origin of Species by Means of Natural Selection, or the Preservation of Favored Races in the Struggle for Life.“

The back cover lists the above information as well as saying the book contains „Information on Intelligent Design vs Evolution.“ The publication, which has already pre-sold over 20,000 copies, is already getting raving reviews from evolutionists:

Comfort added, „People that feel strongly about this issue can simply stand on the sidewalk at the main entrance of any college or university with a sign that says: ‚Free 150th year anniversary editions of Origin of Species.‘ Having an indication of how many want the book will greatly help us with our print-run quantity. We want to get one million copies into the hands of students and professors in colleges and universities throughout the U.S. Let’s see if they try to ban Darwin’s Origin of Species. That would be interesting. The entire 50-page introduction can be freely read on www.livingwaters.com“