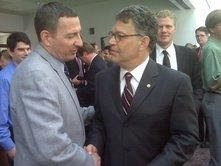 Minister Greets Franken with Questions About Mockery of Christians

WASHINGTON, July 7 /Christian Newswire/ — Rev. Rob Schenck was among invited guests at a special reception held in the US Senate Hart Office Building today for newly sworn US Senator Al Franken of Minnesota. Rev. Schenck cheerfully greeted Sen. Franken with a good-natured question about the former comedian’s caustic and often insulting jokes about Christians and what they believe.

Rev. Schenck is the president of both the National Clergy Council and it’s lay affiliate, Faith and Action, a Christian missionary outreach to elected and appointed officials in Washington, DC.

Earlier in the day a letter from Rev. Schenck to Sen. Franken referencing the former comedian’s history of Christian bashing was hand-delivered to his new office. In it, Rev. Schenck gently suggested the Senator begin his tenure with an apology to the millions of Americans who self-identify as Christians.

„Senator, you’ve really thrown some zingers at Christians over the years. We don’t know whether or not to take you seriously,“ said Rev. Schenck.