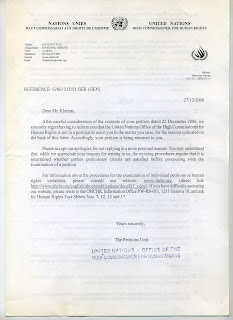 Letter from the United Nations in Geneve to journalist Mr. Andreas Klamm

„The petitions have be written in concern of human rights issues, elementary and fundamental human rights such as the right to live for all people, change of citizenship according to Article 15, Universal Declaration of the Human Rights by the United Nations (UN), targeted killing, the murder of people and other important issues. I believe it is the duty of every human being to stand up for human rights and it does not matter this much, in which countries the abuses and the serious violations against the human rights are going to happen. However even if some rich and wealthy people and certain members of the government believe they might have the right to oppress the truth and to murder people this does not mean that these people and political forces have the right to do so. This does not mean that I am anti-German. I am only against the massive abuses and violations against the human rights and this is a different and important issue.“, said Andreas Klamm.