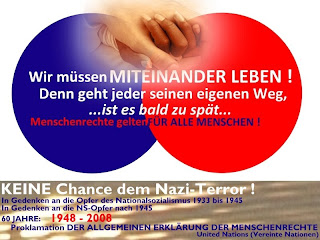 London/3mnewswire.org/October 12, 2008. The journalist, broadcast journalist, host of „3mnewswire.org, Liberty and Peace NOW!, XXL-info.“ and author of several books, Andreas Klamm, has released a new photo art work in concern of the 60th anniversary of the Universal Declaration of the Human Rights by the United Nations, (UN, New York, City) which will be celebrated in December 2008.

Andreas Klamm has said: „With my photo art work I want to express and share my political view that even if we are enemies we have to live together on planet earth as in the entire universe can be not found many planets which are called earth. Therefore I do come to the conclusion that only one planet earth does exist with many people which all have equal rights. Certainly I am a supporter of the idea that all human beings and people no matter where they do live and do come from have equal human rights.“

His photo art work about human rights surprisingly has been published even in a German paper this month.

Andreas Klamm, journalist and author, broadcasting host, photo and tv journalist likes to share his political views in photo art works also. The photo art work created by Andreas Klamm is providing in the German language the message: „We have to live together. If anyone is going his own way it will be soon too late…, Human Rights are valid for all people! No chance for the Nazi terror. In memory of the victims of the Nazi terror from 1933 and 1945 and in memory for those which have got killed because of the Nazi Terror after 1945. 1948 – 2008, 60th anniversary of the declaration of the Universal Declaration of Human Rights in 1948 by the United Nations.“