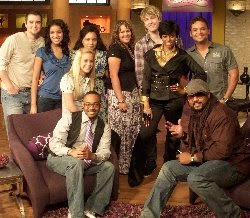 The judges deciding the fate of the contestants are: Michelle Williams from the GRAMMY- winning group „Destiny’s Child“; One of Gospel music’s most prolific talents, J. Moss; and one of the music industry’s most respected executives, Mitchell Solarek. Kimberley Locke, the first American Idol® alumnae to debut at #1 on the Billboard charts with a non-Idol single, serves as co-host along with Mike Kasem („MTV’s Top 20 Video Countdown“ „American Top 10“). In addition, two major musical artists will serve as surprise coaches during the season. The theme for the Gospel Dream’s fourth season: The Greatest Inspirational Songs of All Time.

Twenty-six people were sent home last night with the judges selecting these contestants as the Top Ten Finalists:

Gospel Dream talent auditions invited solo artists between the ages of 16-40, from all genres of Gospel/Christian music styles, including traditional, rock, pop, country and soul to compete for the final competition in Nashville from which ten finalists– and ultimately one winner–will be chosen by a celebrity panel of industry professionals. The winning artist will receive record and music video exposure, among other prizes.

The Gospel Dream series was created by Executive Producer Elvin Ross who is also the series‘ executive producer and musical director. Gospel Music Channel is the fastest-growing network in television and can be seen in 45 million homes on various cable systems around the country, on DIRECTV on channel 338 and on Verizon FiOS on channel 224.