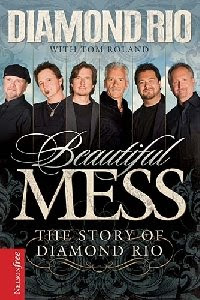 NASHVILLE, July 10 /Christian Newswire/ — For the first time, the real story of one of country music’s most successful bands is told. Diamond Rio’s climb to the musical mountaintop may best be described as the ultimate thrill ride–an adrenaline-rushed ascension, a series of twists and turns, ups and downs, and ultimately the overwhelming feeling that they’d do it all again.

In Beautiful Mess (Thomas Nelson September 22, 2009), Diamond Rio pulls the curtain back, allowing fans unlimited access into their personal lives, revealing details of health scares, freak accidents, and other obstacles that had to be overcome. The book tells the story of how six contrasting personalities formed a partnership that has evolved for more than two decades, establishing an inspiring musical legacy.

„A lot of people are struggling out there,“ said lead singer Marty Roe. „We hope in some way that our story will help encourage them. Our prayer is that readers will see that their mess can become beautiful.“

The book’s release coincides with Diamond Rio’s eleventh album The Reason, on Word Records. The new project that continues their tradition of positively-charged songs fans have come to love.

DIAMOND RIO
For more than two decades, the members of Diamond Rio have been making music together, becoming one of country music’s most successful groups. In a competitive industry where band members come and go, there have been no personnel changes. The original six includes: Marty Roe, Dan Truman, Gene Johnson, Jimmy Olander, Brian Prout, and Dana Williams.

MEMBERS OF DIAMOND RIO ARE AVAILBLE FOR INTERVIEW